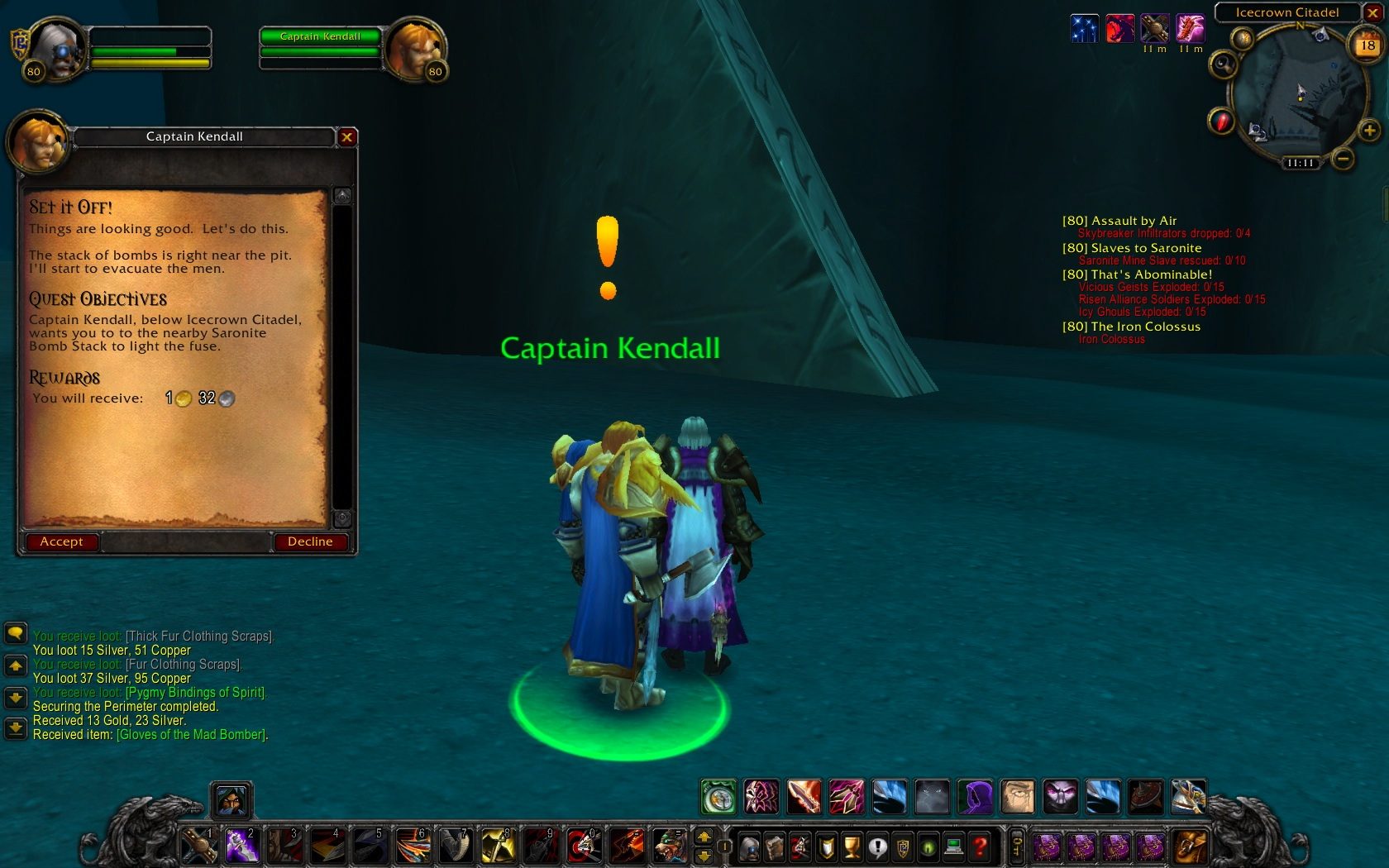 No matter how good your gameplay is or how fleshed out your world is, your players will flounder in your game without a clear direction and a story in which to engross themselves. As the game designer, it is up to you to develop fantastic, intriguing quests that push them forward, make them struggle, give them choices, and supply a satisfactory reward at the end. Your quest for great quest design starts now.

What Do You Want Your Players to Do?

The primary mechanical goal of a quest is to give players an objective with a reward that encourages them to progress through the game world that you have created. For instance, when you place dozens of collectables throughout an area and give a player a quest to retrieve them, the player takes the action of walking around that area, potentially fighting creatures or maneuvering rough terrain, until the player collects them all or gets sidetracked from the quest (and possibly by another quest).

The titular question is the first that you should answer before making any decisions on a quest.

The Elements of a Quest

There are a few common variations of quest mechanics:

Rescue a prisoner from a tower? Traveling over obstacles to collect an item. Explore an island while looking for hidden clues about an incident that happened? Traveling and puzzles. Play the primary game mode in a MOBA and do well at it?

Just obstacles. But these obstacles, these quests, can be the cornerstones of a great game. Whether they are repetitive (like collection quests) or storyline quests that change the tide of events in a game, quests pull your players deeper into the game and provide them tons of different experiences. Games that do this well, like World of Warcraft, Elder Scrolls, Fallout, and countless others, yield the benefits of player loyalty and excitement.

Recognize how your game uses these elements and imbed them as quests to develop your players’ understanding of the game mechanics, improve their skills, reward them accordingly, and pull them deeper into the gaming experience.

It is not always necessary to give players a choice in your story, but it is always increasingly complicated to do so. Whether players have to decide between several quests or the result of a single one, each choice creates a branch of your story that may need to be factored into other elements. In some cases, it can be as simple as changing which NPC spawns and what they say. The most complex may need alternative conversations for a swathe of NPCs and alterations to cutscenes and scripted sequences. Branching quests isn’t a terrible idea, but you need to be prepared for more work on your storyboards.

There’s a great (although older) blog on quest design that you can find on Gamasutra.

Also, check out this cool visual representation that Gamepressure.com created around the Fallout4 main quest paths.

Quests are mostly about the journey, but giving your players a rewarding destination triggers a positive

reinforcement with completing quests in your game. Storyline progression, skill advancement, equipment upgrades, and currency are common reward types that can fit into multiple game genres.

If your game has a microtransaction model, completing up to an arbitrary number of quests a day might reward points or items that would normally need to be purchased. The important thing is to give your players a cookie so your game feels rewarding. Your reward is knowing the framework for building a great quest, so plug your game into it and see what you create.